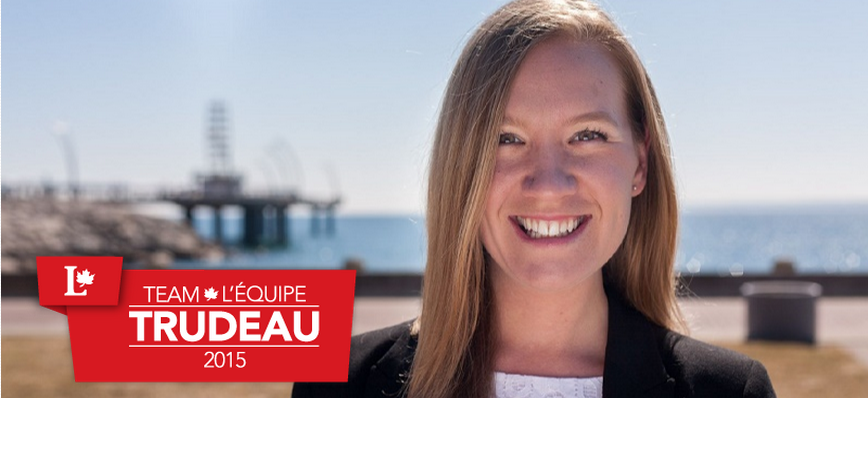 During the final weeks of the election campaign, the NWLC will be featuring short interviews with women running to be elected as a part of Team Trudeau, all across Canada. This installment features Karina Gould, the Liberal Party of Canada candidate in Burlington. NWLC: What’s surprised you the most thus far into your campaign?

Karina: How many amazing and dedicated people have come out to help and support me. There’s no way you can do this on your own and building a great team is paramount for success. I am inspired every day by the dedicated women and men who take time out of their busy lives to work for the campaign and, really, the future of our country. Their positive energy and stories keep me motivated and working hard for the community.

NWLC: What are you hearing the most at the door?

Karina: That people are turned off by the current political process. Countless people have told me that Stephen Harper’s government makes them feel like they don’t matter and that their representative doesn’t listen or advocate on their behalf. I’ve been knocking on doors in Burlington for almost a year now – since last September – and my team and I have reached out to over 20,000 people in our community. People are encouraged that I’m at their door and willing to listen and have a conversation.

NWLC: What’s your best campaign skill/secret that you’ve picked up over the last few months?

Karina: I don’t think this is a big secret – it’s what a candidate should be doing – knocking on doors and listening to people. If I want to be an effective representative I need to be able to empathize with those who I am seeking to serve and this means asking members of the community what their concerns are. I’m involved in politics because I want to do good things for my community and my country; I want to be Burlington’s voice in Parliament. The only way I will know if things are working for folks in Burlington is if I truly seek their input. I ask everyone I meet to keep in touch and encourage them to let me know what they think I’m doing that’s good and what can use improvement. It’s the only way I’m going to learn and grow into being a great representative.

NWLC: Any advice for women who have thought about running before, but have yet to take the plunge?

Karina: You can do it. It is always a challenge but that’s what makes it exciting. I have grown so much as an individual and community activist over the past 18 months. I started this journey more than a year ago sitting at my kitchen table by myself and have now built a supportive team, opened a campaign office, raised funds and am ready for what the coming months will bring. You’ll never know what you’re capable of until you do it and for me there is nothing greater than having the opportunity to serve a country that I’m so proud to call home.

To find out more about Karina, visit her official Team Trudeau candidate site.