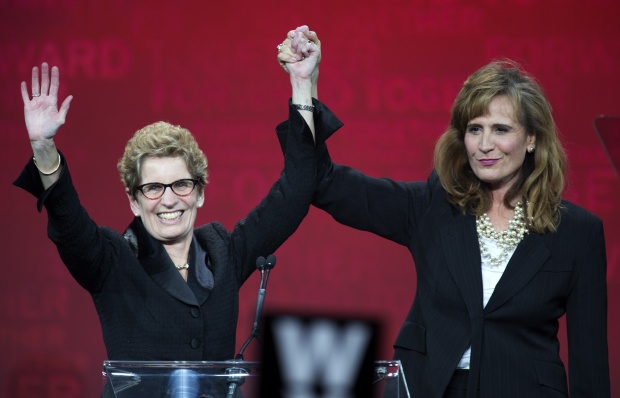 TORONTO – The National Women’s Liberal Commission offered its congratulations today to Kathleen Wynne after she won the leadership of the Ontario Liberal Party at its convention at Toronto’s Maple Leaf Gardens.

“Today, Ontario joins five other Canadian provinces and territories with a woman at the helm. With 87% of Canadians now being represented by a female premier, there is more momentum than ever before to increase female representation at all levels of government, including federally,” said NWLC President Mary Pynenburg. “Slowly but surely, progress is being made on the under-representation of women in elected office.”

“Ontario Liberals made history this year with a race for the premiership that featured two female frontrunners,” said NWLC Vice President for Ontario Carlene Variyan. “We know that women make collaborative leaders who are able to deliver value for the full cross-section of society. Today I hope we’ve given more women the confidence and ambition to enter the political arena.”

Following the installation of Ontario’s first female premier, the NWLC looks toward April 14, 2013, when a new leader of the Liberal Party of Canada will be chosen. The race features four strong female candidates, with both male and female contestants joining the conversation about women’s representation in Parliament.

The National Women’s Liberal Commission is the voice of women in the Liberal Party of Canada, mandated to ensure equal participation of women and men at all levels of the Party and to work for greater female representation in federal politics.